Wondering How to Identify an Old Pepsi Bottle? Read on to Know

Old Pepsi bottles are hard to come by, but finding an antique Pepsi bottle can be a valuable addition to a collection. If you are wondering how to identify and tell the age of an old Pepsi bottle from all the fakes out there, then you are at the right place. This HobbyZeal article will help you determine that the Pepsi bottle you found is really antique, and also tell you how to date it.

Home / Uncategorized / Wondering How to Identify an Old Pepsi Bottle? Read on to Know 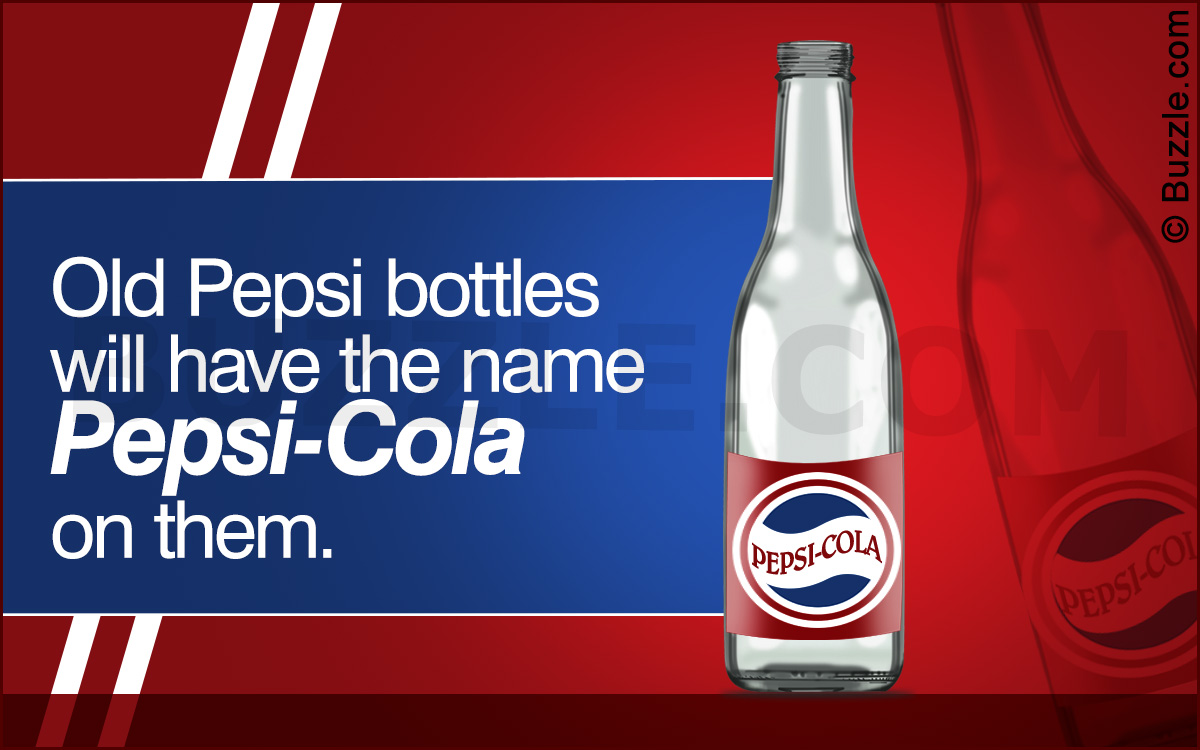 Old Pepsi bottles are hard to come by, but finding an antique Pepsi bottle can be a valuable addition to a collection. If you are wondering how to identify and tell the age of an old Pepsi bottle from all the fakes out there, then you are at the right place. This HobbyZeal article will help you determine that the Pepsi bottle you found is really antique, and also tell you how to date it.

The history of Pepsi can be traced all the way back to the summer of 1858, when a pharmacist by the name of Caleb Bradham was trying to find a way to draw more customers to his store in New Bern, North Carolina. He realized that there was nothing better than a drink for such a purpose.

After experimenting with a variety of nuts and syrups, he finally created a beverage which soon became popular all over town as ‘Brad’s Drink’. Bradham soon realized the market potential of this drink, for which he sought a trademark in 1902, by the name Pepsi-Cola, named after two of its main constituents – pepsin and kola nuts.

Bradham began selling his beverage at soda fountains, but it dawned on him that if he offered it in bottles, sales would shoot up, since people could consume it anywhere. The company began by offering the drink in glass bottles manufactured by local glass makers, and it was only in 1940 that the first standardized Pepsi-Cola bottle entered the market. Since soda bottles aren’t made of glass anymore, these old Pepsi bottles are valuable as a collector’s item. As such, let us learn how to identify an old Pepsi bottle.

Identifying Techniques
Observe the bottle. If it is generic without any embossing, then it’s probably from the early part of the twentieth century, between 1905 to 1933. This was the time when Pepsi bottles were manufactured by local glass makers. However, some generic bottles with paper labels were used till 1940.
If the glass has a dark hue, especially amber, then it was probably manufactured before 1907. But this needs to be confirmed because of reproductions, and the company’s commemorative versions which resemble antique bottles. If it is genuine, you won’t be able to read a paper by looking through the glass. Moreover, all reproductions are marked with the code ‘A204’ on the base, and have a lighter color.
If the bottle seems very old, try looking at its base. If you can see a small depression which looks like something has been broken off, then such a bottle is one of the earliest versions. These depressions are called pontil marks, where the glass rod used during manufacture is broken off.
Look for a paper label with the term ‘Pepsi-Cola’, or any remains of one. Such a Pepsi bottle is probably made before 1935, when paper labels were used more frequently.
If you spot a standardized bottle having a wave-like embossing at the shoulder which bears the company name, then it was manufactured between 1935 to 1940. Due to the Great Depression, only a few of these were manufactured, making them quite valuable.
Observe the company name on the embossing or the label. If it is Pepsi-Cola, then the bottle is definitely a pre-1953 make, as the term ‘Cola’ does not occur on bottles manufactured later, which are not classified as antique.
Standardized bottles, which bear the label on the glass itself (called Applied Color Label (ACL)), rather than paper ones bearing the company name, indicate a manufacturing date between 1945 and 1948. To confirm this, look at the company name. If there is a colon between the words ‘Pepsi’ and ‘Cola’, then this is a genuine version known as ‘Double-dot’, owing to the colon.
If the ACL on the bottle has the words ‘Pepsi’ and ‘Cola’ separated by a hyphen, along with the term ‘2 Full Glasses’ on the neck, then this version is manufactured after 1950, and is called the ‘Dash’ bottle.
Observe the base of the bottle for the mold code. This code which appears on the bases of Pepsi bottles manufactured in the 1940s, consists of a one or two-digit numbers on the left side of a letter, which is typically A or B, and another on its right side. The number on the right may indicate the last digits of the manufacturing date. For example, the code ‘2 A 44’, probably indicates a bottle manufactured in the year 1944.
Bottles with an embossing on the neck, with a ‘swirl’ design having the company name displayed in a rounded form, and surrounded by an oval border, were manufactured by Pepsi beginning in the late 1950s.
Older Pepsi bottles had narrower necks as compared to the later versions. Place a beer bottle crown on the opening of the bottle. If the neck is too large for the crown to fit, then it is not an antique.

When deciding the value of an old Pepsi bottle, its year of manufacture, the logo color, and condition of the paper label, if present, are important. Logos with the colors red, white, and blue, which reflect the patriotism of the Second World War, might fetch anywhere between $20 to $25 each. Bottles with logos of red and white, which were made after 1948, might not get such a high price.